Indifference curve analysis lies behind a demand curve. It can be used to examine the effect of price changes and income changes. If the price of B now falls, the budget line will pivot. The consumer now maximises utility consuming Q3 of product A and Q4 of product B. The fall in the price of product B has led to an increase in the quantity demanded of Q2Q4. This can be shown on a demand curve. 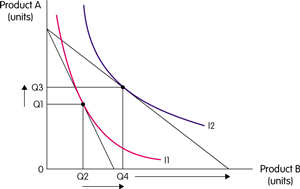 There are two different phenomena underlying a consumer's response to a price drop: The substitution and income effects will generally work in the same direction, causing consumers to purchase more as the price falls and less as the price rises. The indifference curve can be used to separate these two effects. In the case of a normal good, higher real income leads to an increase in quantity demanded; this complements the increase due to the substitution effect. This change is shown in the diagram below. 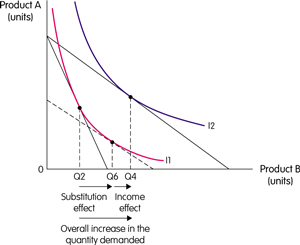 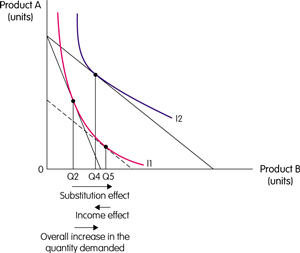 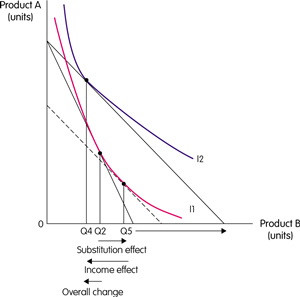 Another exception is the case where an increase in price causes an increase in demand. This results in an upward-sloping demand curve, and the good is called a Veblen good. One possible justification for a Veblen good is that people associate higher prices with status, luxury, and quality, so that a higher price might increase the perceived value of a good. Substitutes and Complements Indifference curve analysis will also allow us to see whether two products are substitutes or complements. 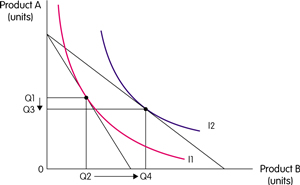 In the diagram above, a fall in the price of product B has led to a change in the budget line. As a result, more of product B and less of product A are bought. The products are substitutes. The consumer has switched from product A to product B. 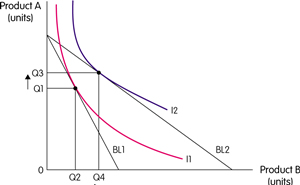 In the diagram above the price of product B has fallen. This has led to an increase in the quantity demanded of A and B; the two products are complements. A lower price leads to more of both goods being bought.
If you want to change selection, open original toplevel document below and click on "Move attachment"