Answer
The term “fermentation” is derived from the Latin verb fervere, to boil, thus describ- ing the appearance of the action of yeast on the extracts of fruit or malted grain. The boiling appearance is due to the production of carbon dioxide bubbles caused by the anaerobic catabolism of the sugar present in the extract.

However, growth results in the consumption of nu- trients and the excretion of microbial products; events which influence the growth of the organism. Thus, after a certain time the growth rate of the culture decreases until growth ceases. The cessation of growth may be due to the depletion of some essential nutrient in the medium (substrate limitation), the accumulation of some autotoxic product of the organism in the medium (toxin limitation) or a combination of the two. The nature of the limitation of growth may be explored by growing the organ- ism in the presence of a range of substrate concentrations and plotting the biomass concentration at stationary phase against the initial substrate concentration, as shown in Fig. 2.3. From Fig. 2.3 it may be seen that over the zone A to B an increase in initial substrate concentration gives a proportional increase in the biomass produced at stationary phase, indicating that the substrate is limiting. The situation may be described by the equation: =− xY Ss(

Thus, Eq. (2.4) may be used to predict the biomass that may be produced from a certain amount of substrate. Over the zone C to D an increase in the initial substrate concentration does not give a proportional increase in biomass. This may be due to

Question
[default - edit me]
Answer
The yield factor (Y) is a measure of the efficiency of conversion of any one sub- strate into biomass and it can be used to predict the substrate concentration required to produce a certain biomass concentration. However, it is important to appreciate that Y is not a constant—it will vary according to growth rate, pH, temperature, the limiting substrate, and the concentration of the substrates in excess.

substrates are shown in Table 2.2, from which it may be seen that such values are

usually very small and the affinity for substrate is high. It will be appreciated that

the biomass concentration at the end of the exponential phase is at its highest and,

thus, the decline in substrate concentration will be very rapid so that the time period

during which the substrate concentration is close to K

is very short. While the con-

facilitates the quantitative description of the relationship between specific

growth rate and substrate concentration it should not be regarded as a true constant.

Exponential growth in batch culture may be prolonged by the addition of fresh me- dium to the vessel. Provided that the medium has been designed such that growth is substrate limited (ie, by some component of the medium), and not toxin limited, exponential growth will proceed until the additional substrate is exhausted. This ex- ercise may be repeated until the vessel is full. However, if an overflow device was fitted to the fermenter such that the added medium displaced an equal volume of cul- ture from the vessel then continuous production of cells could be achieved (Fig. 2.5). If medium is fed continuously to such a culture at a suitable rate, a steady state is

achieved eventually, that is, formation of new biomass by the culture is balanced by

the loss of cells from the vessel. The flow of medium into the vessel is related to the

volume of the vessel by the term dilution rate, D, defined as:

where F is the flow rate (dm

Thus, D is expressed in the unit h 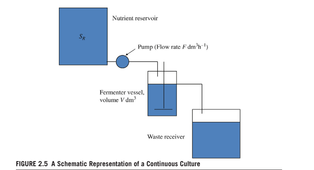 Question
[default - edit me]
Answer
The net change in cell concentration over a time period may be expressed as: =− dx dt growth output or µ =− dx dt xD x. (2.10) Under steady-state conditions the cell concentration remains constant, thus dx/dt = 0 and: µ =xD x (2.11) and µ = D. (2.12) Thus, under steady-state conditions the specific growth rate is controlled by the dilution rate, which is an experimental variable. It will be recalled that under batch culture conditions, an organism will grow at its maximum specific growth rate and, therefore, it is obvious that a continuous culture may be operated only at dilution rates below the maximum specific growth rate. Thus, within certain limits, the dilu- tion rate may be used to control the growth rate of the culture. The growth of the cells in a continuous culture of this type is controlled by the availability of the growth limiting chemical component of the medium and, thus, the system is described as a chemostat. The mechanism underlying the controlling effect of the dilution rate is essentially the relationship expressed in Eq. (2.5), demonstrated by Monod in 1942: µµ =+ sK s/( ) smax At steady state, µ = D, and, therefore, µ =+ Ds Ks /( ) smax where s is the steady-state concentration of substrate in the chemostat, and µ = − s KD D ()

Question
[default - edit me]
Answer
All microorganisms require water, sources of energy, carbon, nitrogen, mineral elements, and possibly vitamins plus oxygen if aerobic. On a small scale it is relatively simple to devise a medium containing pure compounds, but the result- ing medium, although supporting satisfactory growth, may be unsuitable for use in a large scale process. On a large scale one must normally use sources of nutrients to create a medium which will meet as many as possible of the following criteria: 1. It will produce the maximum yield of product or biomass per gram of substrate used. 2. It will produce the maximum concentration of product or biomass. 3. It will permit the maximum rate of product formation. 4. There will be the minimum yield of undesired products. 5. It will be of a consistent quality and be readily available throughout the year. 6. It will cause minimal problems during media making and sterilization. 7. It will cause minimal problems in other aspects of the production process particularly aeration and agitation, extraction, purification, and waste treatment.

Question
[default - edit me]
Answer
Medium formulation is an essential stage in the design of successful laboratory ex- periments, pilot-scale development, and manufacturing processes. The constituents of a medium must satisfy the elemental requirements for cell biomass and metabolite production and there must be an adequate supply of energy for biosynthesis and cell

Question
[default - edit me]
Answer
Water is the major component of almost all fermentation media, and is needed in many of the ancillary services such as heating, cooling, cleaning, and rinsing. Clean water of consistent composition is therefore required in large quantities from reliable permanent sources. When assessing the suitability of a water supply it is important to consider pH, dissolved salts, and effluent contamination

Question
[default - edit me]
Answer
Energy for growth comes from either the oxidation of medium components or from light. Most industrial microorganisms are chemoorganotrophs, therefore the com- monest source of energy will be the carbon source such as carbohydrates, lipids, and proteins. Some microorganisms can also use hydrocarbons or methanol as carbon and energy sources

Tags
#causality #statistics
Question
The graph with edges removed is known as the [...] graph
Answer
manipulated

Open it
In causal graphs, causation flows along directed paths.

Tags
#causality #statistics
Question
Whenever, do(𝑡) appears after the conditioning bar, it means that everything in that expression is in the post-intervention world where the intervention do(𝑡) occurs. For example, 𝔼[𝑌 | do(𝑡), 𝑍 = 𝑧] refers to the expected outcome in the subpopulation where 𝑍 = 𝑧 after the [...] subpopulation has taken treatment 𝑡 .
Answer
whole

Open it
that expression is in the post-intervention world where the intervention do(𝑡) occurs. For example, 𝔼[𝑌 | do(𝑡), 𝑍 = 𝑧] refers to the expected outcome in the subpopulation where 𝑍 = 𝑧 after the <span>whole subpopulation has taken treatment 𝑡 . <span>

Tags
#causality #statistics
Question
Whenever, do(𝑡) appears after the conditioning bar, it means that everything in that expression is in the [...] world where the intervention do(𝑡) occurs.
Answer
post-intervention

Open it
Whenever, do(𝑡) appears after the conditioning bar, it means that everything in that expression is in the post-intervention world where the intervention do(𝑡) occurs.

Open it
It might seem like consistency is obviously true, but that is not always the case. For example, if the treatment specification is simply “get a dog” or “don’t get a dog,” this can be too coarse to yield consistency. It might be that if I were to get a puppy, I would observe 𝑌 = 1 (happiness) because I needed an energetic friend, but if I were to get an old, low-energy dog, I would observe 𝑌 = 0 (unhappiness).

Open it
dog,” so both correspond to 𝑇 = 1 . This means that 𝑌(1) is not well defined, since it will be 1 or 0, depending on something that is not captured by the treatment specification. In this sense, <span>consistency encompasses the assumption that is sometimes referred to as “no multiple versions of treatment.” <span> 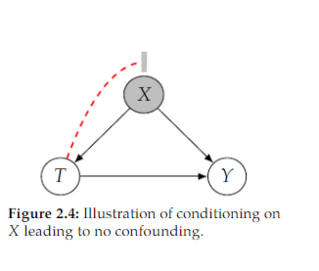 Question
However, we do have [...] exchangeability in the data. This is because, when we condition on 𝑋 , there is no longer any non-causal association between 𝑇 and 𝑌 . The non-causal association is now “blocked” at 𝑋 by conditioning on 𝑋 . We illustrate this blocking in Figure 2.4 by shading 𝑋 to indicate it is conditioned on and by showing the red dashed arc being blocked there
Answer
conditional

Open it
SUTVA is satisfied if unit (individual) 𝑖 ’s outcome is simply a function of unit 𝑖 ’s treatment. Therefore, SUTVA is a combination of consistency and no interference (and also deterministic potential outcomes)

Tags
#DAG #causal #edx
Question
When there is an association between A and Y, even if A has a null causal effect, a zero causal effect on Y, then we say that there is bias [...].
Answer
under the null

Open it
When there is an association between A and Y, even if A has a null causal effect, a zero causal effect on Y, then we say that there is bias under the null.

Tags
#DAG #causal #edx
Question
We have seen that confounding is a [...] bias when we are conducting causal inference research.
Answer
systematic

Open it
We have seen that confounding is a systematic bias when we are conducting causal inference research.